With Instagram increasing in popularity every year, businesses are flocking to it. This has the unfortunate side effect of making the audience in general less engaged, as more of the content they see becomes low quality marketing drivel, decreasing engagement rates across the board. It happens on every platform that grows popular enough to have a massive brand presence, and it’s been happening to Instagram ever since they made it accessible to non-mobile devices.

With engagement rates dropping and an audience that is increasingly likely to ignore or unfollow you, it’s not surprising that many businesses are looking for alternative solutions. Even individuals and wanna-be influencers feel the strain and are looking for something else they can do, some secret solution or “get rich quick” scheme for followers.

Unfortunately, there’s a niche established around filling this role. There are dozens of apps out there that claim to get you followers, with varying levels of “these are definitely real people” guarantees. So are any of those follower apps legit?

I’m going to list a handful of the most popular follower apps here, but before you dig in, I should warn you. Using these apps is likely to tank your engagement rates, disrupt your analytics, or even get your account suspended. Some of them may even include malicious code that hijacks your account. I do not recommend using any of them.

Additionally, don’t be surprised if you’re checking this article in a few months or a year and half of these links don’t work. Instagram is somewhat aggressive with blocking these apps and, as such, they are frequently removed from app stores as they cease working: Free Like 4 Like – This is an example of how sketchy these apps can be; it’s not just not on the app stores, it requires side-loading an APK file for your Android while bypassing your phone’s security measures. FastLykke – This one isn’t even an app, though it shows up on app lists all the time. It’s really just a follower seller, and I’ll discuss those as well in the next section. IG Flash – Another side-loading app that doesn’t just get you “followers”, it bombards you with advertising for all manner of scummy, shady, and outright fraudulent apps and services. Unless you actually believe there are hot singles in your area looking for you… 4Gram – This one is a web app and it requires you to give your information to them through what is very much NOT an official oAuth authenticator. You’re literally just giving these guys your information and password.

So, there are a number of different kinds of follower apps for Instagram, but they fall into one of a few different categories.

The Follower Purchaser – These come in both app and website form, but they all work the same way. You pay some money to the platform, and the platform gives you followers. Also known as buying followers, the majority of the time, these apps simply don’t give you real followers. They have legions of bot accounts at their command. When you pay for 100 followers, you get 100 followers, none of whom are real people. Sure, your profile gets a higher number, but your engagement doesn’t go up, you’re out the money you spend, and many of those followers will disappear in the next Instagram purge. The Follow Trader – These are the most common form of follower app. When you install the app, you become part of a trading network. You have to either pay for credits, or earn credits by following accounts the app presents to you, or liking and commenting on content the app shows you. You can then spend those credits to have your account put in the to-follow list of other app users, and your content in the to-engage feed.

Of course, with an app like this, it only works as long as there are people in the network willing to follow and engage. Many of these apps fail after their audience falls off, though some use fake accounts to “seed” the network with an ongoing influx of pithy, meaningless engagement and fake followers to keep it cycling and, of course, making money.

The Spammer App – This app is similar to the above, except it might not even require you to do anything but authenticate your login information. The reason for this is because it uses your account as a bot account for selling follows and engagement. Sure, you get followers – from other people who have fallen for this app – but your account is also used to follow others and post comments without your knowledge or consent. These are the worst of the apps precisely because the followers you get look real and active. They’re real people whose accounts are being taken over by spammers. The accounts are real, but the follows and the engagement are fake.

The Phishing App – The last kind of follower app is simply a fake app that steals your information. It makes it look like you’re logging in via Instagram, oAuth, or a similarly trustworthy authentication system. The fact is, you’re not. All you’re doing is giving your information to someone who will then use it to either hack other accounts you own or just take over your Instagram account. Obviously, this isn’t something you want to have happen.

Of course, who am I to say that these apps are fake? I’m just a marketer running a blog. Thankfully, I’m not the only one saying this. MalwareBytes has studied these apps and found that most of them simply steal information.

Why You Shouldn’t Use a Follower App

There are several different reasons why you should avoid follower apps, even ones that look legitimate and have positive reviews. After all, anyone can leave a positive review on an app, even if they don’t really use the app at all.

Your information could be stolen. As mentioned prominently above, if you’re not careful with the apps and websites you log into using your Instagram information, you could very well be giving that information over to organized hackers who will exploit it for everything from bot controlling your Instagram account to hacking your bank account. Definitely not something you want to have to fight and recover from. Others will be “fake” follows from real people. Accounts that are compromised can still look legitimate, but the follows they give you aren’t driven by any genuine interest, they’re simply caused by the software taking control.

Others will look legitimate but are completely fake, using stolen information and copied images from other accounts. There’s very little protection to save images from being scraped and re-used on Instagram, after all.

Often, you get no engagement at all. Even if you’re getting a big pile of followers from these apps, which seems to be a relative rarity, you’re still going to encounter the fact that none of them actually care about your content. None of them will leave you comments, none of them will like your posts, and certainly none of them will click your links or explore your brand further. 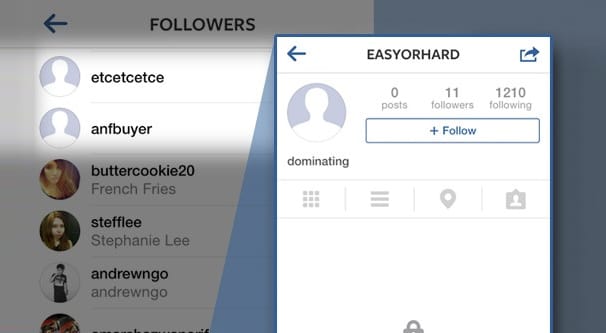 Think of it like you’re a band going to perform at a concert hall, only to find that 99 out of every 100 seats is filled with a cardboard cutout. Your real audience is a small proportion of the seats in the venue, and the rest aren’t going to listen, aren’t going to talk about you, and aren’t going to buy your albums.

The money you spend will be wasted. This should go without saying, but any amount of money you spend on these apps is wasted. Buying an app, buying tokens within an app, or paying for engagement or followers through the apps is all a waste of money.

What You Should Do Instead

So, if follower apps aren’t the right tool for the job, what can you do instead to grow your Instagram account?

Well, if you want to use apps to benefit your profile, ditch the follower apps. Instead, use apps that help you curate content and create better posts. These are much more legitimate and tend to give you excellent ideas or content to further your account.

Many Instagram apps and platforms help you produce stories as well, so you can create more engaging content that pulls in users. Instagram really likes promoting stories right now, so they’re an excellent format to make use of.

You can also focus your time and energy into producing better content. Higher quality images can go a long way towards encouraging an audience to grow. Writing clever, engaging captions can also help a lot. Perhaps most importantly, spending some time researching hashtags and using the right ones will get you a lot more exposure, and consequently a lot more engagement and follows from real people with real interests. There are even apps specifically designed to help you with hashtag research. Another route you can consider is buying sponsored positions and shout-outs from existing influencers. Just make sure that you trust the influencer and that you can audit their followers to make sure their audience isn’t just as fake as the audience you’d get from a follower app.

If you’re willing to pay money, the last thing you want to do is buy followers through a shady app. Instead, devote that money to Instagram ads. Instagram ads can convert money into followers, engagement, and even clicks through to a website. Since Instagram ads are powered by the Facebook ad platform, you have access to detailed analytics and a ton of targeting options, which make it easy to optimize your ads to minimize costs.

Now, I’m not going to say you can rival the prices of these follower apps. The actual cost of a follower through Instagram ads can vary a lot depending on your niche, your content, and your audience. Often, it will be more expensive than the people who sell you 1,000 followers for $10 or whatever. On the other hand, since none of those followers are real, the ones you get from Instagram ads are infinitely more valuable.

At the end of the day, really all you need to do is invest in better content, publish content on a reliable schedule, and wait. As long as you’re producing something worth viewing, people will find it and people will share it. The trick is, organic growth on a social network takes time, and far too many people want a shortcut to the big times. There just isn’t that kind of shortcut. You have to walk the path to reach the destination.

10 Ways to Check if Your Instagram Followers are Fake
Join the discussion: